« Plier-Déplier » or Folding and Unfolding is a piece whose special characteristic is that it was conceived by two composers. Its form is one of sharing and exchange, the music of one unfolding into the music of the other.

From the outset, a clear trajectory gives structure to the piece – starting with the pizzicati played in the highest possible tessitura of the instruments. The trajectory evolves down to the lowest tone produced by the last cord of the cello which is so slack that is becomes barely audible. This thematic thread developing throughout the piece is deformed, interrupted and fractured by the contrast between two different concepts of musical tempo: one dynamic and one suspended. The former imposes the energy and dynamism that goes with the movements and the second is expressed through the dimensions of the sound itself. Thus the piece takes the form of a permanent alternance between two states, two musics, which while never being superimposed, break the continuity of the thematic thread.

A third voice, consisting of pre-recorded excerpts of the quartet comes as an echo to this dialog bringing reminiscences of music already heard or premonitions of sound to come.

In this weave, made up of folding and unfolding fabric, certain sounds are impossible to achieve with two hands and call for the intervention of another musician. Thus, at the end of the piece, the quartet turns into a duet where the first violinist plays with the viola player on the viola, while the second violinist does the same on the cello. As a consequence the musicians share the space of their instruments just as the authors shared their space of composition.

Plier-Déplier  or Folding and Unfolding is a command of the state whose creation has been a Coproduction Grame (Lyon CNCM) – Biennale Musiques en Scène and Césaré (CNCM Reims).

The disc includes two songs, pieces of each composers intended to be played by young musicians: Découper – petite passacaille of Daniel D’Adamo et Last Week-End on Mars of Thierry Blondeau. 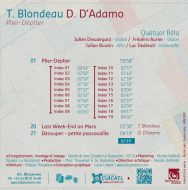