Felman Morton (1926-1987) was originally a pianist and this is probably not unrelated to the fact that he wrote between 1948 with “Illusions” and 1986 with “For Stefan Volpe” not less than forty-seven pieces for piano solo or several pianos, without obviously counting works for piano and other instruments.

The two works on this disc represent the two extremes of this long series since “Piano Piece” is from 1952 while “Triadic Memories”  from 1981.  M.T.

“What Western musical forms have become is a paraphrase of memory. But memory could operate otherwise as well. In Triadic Memories, a new piano work of mine, there is a section of different types of chords where each chord is slowly repeated. One chord might be repeated three times, another, seven or eight – depending on how long I felt it should go on. Quite soon into a new chord I would forget the reiterated chord before it. I then reconstructed the entire section: rearranging its earlier progression and changing the number of times a particular chord was repeated. This way of working was a conscious attempt at ‘formalizing’ a disorientation of memory. Chords are heard repeated without any discernible pattern. In this regularity (though there are slight gradations of tempo) there is a suggestion that what we hear is functional and directional, but we soon realize that this is an illusion; a bit like walking the streets of Berlin – where all the building look alike, even if they‘re not.”

“Someone without my experience would look at the written text of Triadic Memories and would be completely unable to imagine the resulting music. He would say that the manuscript is empty, that it is not very interesting, that it doesn’t sound like the way it’s written. If I were to judge simply from the written score, I would say that there is nothing there. The pedal is extremely important, it gives the piece its general character. In fact, when you listen, you have no idea as to how rhythmically complicated it is on paper. It floats. On paper it appears to be a rhythm, but it is not the case, it is duration.”

“Piano Piece ” is part of the proposed works for piano students in Cycle 2 conservatories. 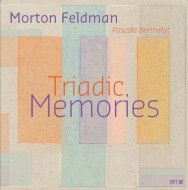